Your support is needed and appreciated! Click here to DONATE NOW 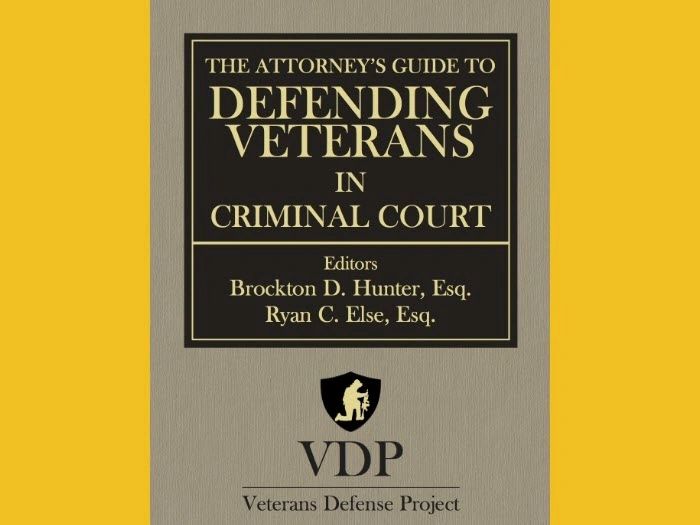 We literally wrote the book on defending veterans

As criminal defense lawyers and military veterans, Ryan Else and Brockton Hunter set out to create a text that would empower our legal colleagues to passionately and skillfully defend our fellow veterans in criminal court.

An introduction to the book

Get empowered to defend veterans

For as long as warriors have returned from battle, some have brought their war home with them, bearing invisible wounds that haunt in the present. These echoes of war—manifested in self-destructive, reckless, and violent behavior—reverberate through society, destroying not only the lives of these heroes, but their families and communities.

A new generation of warriors is now returning home and there is good reason to believe more of them will bring their war home with them than ever before. Unlike previous generations of warriors, this one is relatively small, yet it will have fought the two longest wars in our country’s history—simultaneously. Without the draft we relied on in past wars, the burden of the fighting falls on fewer shoulders, with many veterans of this generation serving multiple combat tours. We have also called on them to fight in the most hostile of environments—from the sweltering streets of Iraq, to the hostile high mountains of Afghanistan—facing fanatical enemies prepared to die for their cause. Many of this generation will have survived combat injuries that would have killed them in the past, but will nonetheless bear the psychological scars of their brush with death. Their modern combat training and conditioning ensured that they killed when called on to do so, yet did little to prepare them for the emotional and psychological costs of taking human life.

While this generation of returning veterans has been called on to serve and sacrifice like none before them, our society has never been asked to serve—or sacrifice—less. Most Americans no longer follow news of the war in Afghanistan. Even at the height of the war in Iraq, when media coverage was ubiquitous, we were allowed only, as one of our veteran clients refers to it, “a Clorox bleached version of the war,” carefully sanitized of all of its horror. We were not even allowed to see images of flag-draped coffins unloaded from planes in the early years of the conflicts, out of concern it would impact our support for their continuance. It worked.

This disconnect between our society and our wars was best symbolized by a piece of graffiti left by an anonymous Marine on a concrete blast wall in Ramadi, Iraq at the height of that war:

America is not at war. The US marine corps is at war. America is at the mall.

MOre on the book

No one knows what they have seen

Our veteran clients commonly echo this sentiment, reporting to us that no one knows what they have seen—what they have done—and no one cares, too absorbed in our everyday lives to even begin to understand. Whereas returning Vietnam veterans were notoriously spit on and called “baby killers,” this generation is largely invisible – feeding their isolation and hastening a downward spiral for many.  The gulf between society and this generation of veterans will be increasingly dangerous in the coming years unless we find ways to bridge it. But where do we start?

Author, Karl Marlantes, a Rhodes Scholar, who served as a Marine infantry officer in Vietnam and earned the Navy Cross, among many other medals, provides us with hard-won wisdom here:

There is a correct way to welcome your warriors back. Returning veterans don’t need ticker-tape parades or yellow ribbons stretching clear across Texas. Cheering is inappropriate and immature. Combat veterans, more than anyone else, know how much pain and evil have been wrought. To cheer them for what they’ve just done would be like cheering the surgeon when he amputates a leg to save someone’s life. It’s childish, and it’s demeaning to those who have fallen on both sides. A quiet grateful handshake is what you give the surgeon, while you mourn the lost leg. There should be parades, but they should be solemn processionals, rifles upside down, symbol of the sword sheathed once again. They should be conducted with all the dignity of a military funeral, mourning for those lost on both sides, giving thanks for those returned…Veterans just need to be received back into their community, reintegrated with those they love, and thanked by the people who sent them.” (fn 1)

The whole community must come together to bridge the gulf and properly welcome this generation of veterans. When they stumble and fall into the criminal justice system, as we know many of them will, we in the defense bar have a additional, solemn role to play, in helping them up and bringing them the rest of the way home.   As we prepare to defend those who defended us, we must first recognize that we in the criminal defense bar share much in common with our veteran clients. Like soldiers, our job is often gritty and thankless, our mission misunderstood by the general public. Like soldiers, ours is a proud warrior culture, a tight and insular community with an esprit de corps not found in many other professions or areas of the law. Above all, we, like our veteran clients, swore a sacred oath to defend the rights and freedoms that make our system of government so special.

As criminal defense lawyers and military veterans, Ryan Else and I set out to create a text that would empower our legal colleagues to passionately and skillfully defend our fellow veterans in criminal court. To do so, we sought out some of the top experts from a wide range of disciplines to each contribute a chapter on their particular area of expertise. The resulting 24 chapters are divided into four major sections. Section I, Combat Trauma and Criminality: the Historical and Sociological Connection, provides the big picture view and serves as the contextual foundation upon which the rest of the book is built. Section II: Understanding Invisible Injuries: PTSD, TBI, and Related Substance Abuse, provides an overview of the current state of the rapidly evolving medical and psychological science on combat trauma. Section III: Special Considerations in the Attorney-Veteran Client Relationship provides military cultural competency to better understand your client and document his or her military service. Section IV: Defending the Combat Veteran in Criminal Court applies the historical, medical, and cultural content of the three preceding sections and translates it into concrete legal strategies, from case preparation to plea negotiation, trial, sentencing, and appeal. The Appendix contains a wealth of practical resources, guides, chronologies, questionnaires, and samples.

With proper preparation and execution, defending veterans can be among the most rewarding experiences a defense attorney can have. We can simultaneously help repay our nation’s debt to these heroes for their service and sacrifice, uphold the special protections now afforded them in our justice system, and benefit society by helping turn them back into assets, not threats, to their communities.